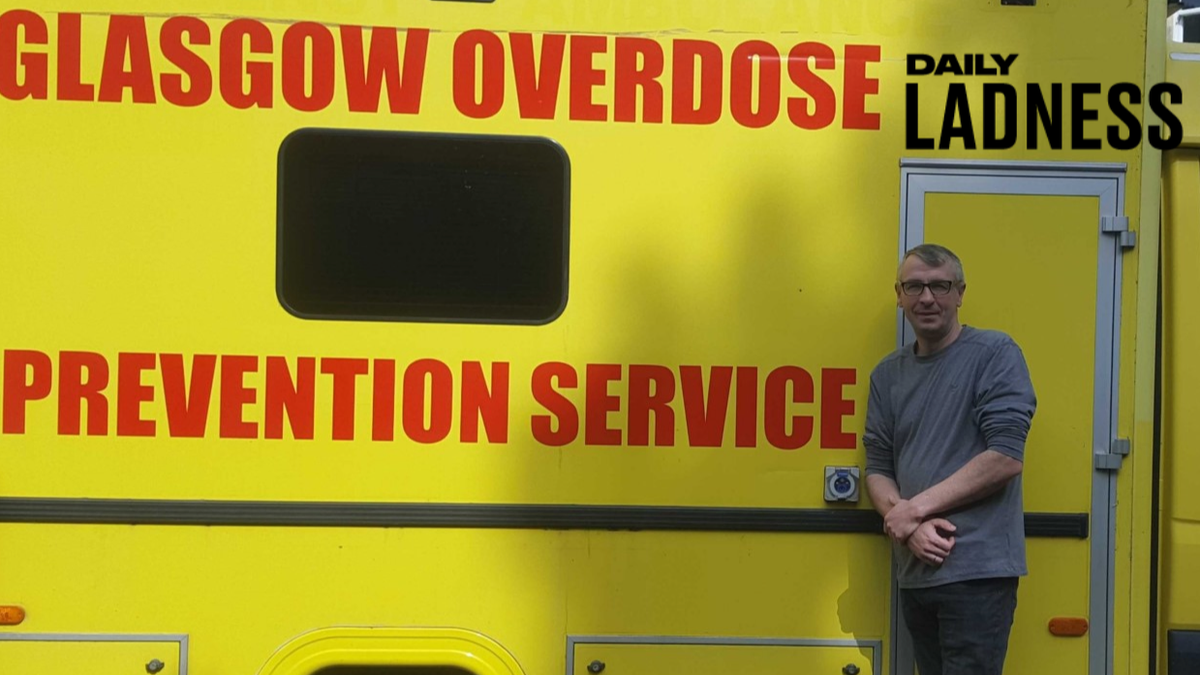 Peter Krykant began experimenting with drugs when he was just 11 years old, first smoking cannabis, before moving on to ecstasy and then heroin at the age of 17.

As his addiction took hold, Peter’s life spiraled out of control, leading to him becoming homeless and sleeping rough.

Eventually, he was able to kick his habit, find a job, and meet his wife.

But after seeing the damage the drug had done not just to his life but to those around him in Scotland, where more than 1,300 people died from drug abuse in 2020 – the highest in Europe, he decided to do something.

In August 2020 he transformed an old van, then later a disused ambulance, into a mobile drug-taking unit, which was a safer place for Glasgow’s homeless, away from rat-infested alleys and doorways some stores. often frequented.

Speaking to LADbible, the 45-year-old said: “The ambulance was quite a symbolic vehicle, you know, because it was a vehicle that I could say was a health response to a health issue. .

“And it’s a health issue, when people publicly inject drugs in the back alleys, you know, it requires a health response to support safer drug use to reduce infections, – HIV, hepatitis C transmissions, to keep people alive in the event of an overdose, etc.”

Along with supervising their drug use, Peter also distributed food, drink, and new clothes.

“I believe that people who are among the most marginalized people in society – rough sleepers who inject drugs in filthy, filthy conditions – deserve a new pair of socks rather than a second one. pair of socks,” he said.

With his connections in the homeless community, people trusted Peter, and after a few weeks of driving around downtown, dozens of people came to see him every day.

During the service’s 10 months of operation, Peter oversaw nearly 900 injections and saved nine people from overdose.

Peter says, “If people use drugs on their own, there’s a good chance they’ll die.

“We dealt with a number of overdoses, we administered naloxone on several occasions.

“It’s normal. When I was still an injection drug user, I overdosed several times.

“There have never been millions of visits to supervised consumption facilities around the world…and we have yet to record a death.

“And luckily Glasgow didn’t have the first.”

He adds: “That was always going to be a concern, of course – we weren’t a sanctioned site, we weren’t carrying oxygen etc.

“But one of the volunteers, who was a regular volunteer, was a former nurse, so we had some kind of trained medical staff there.”

Unfortunately for Peter, the service had a massive impact on his personal life, he lost his job due to an alleged “conflict of interest” and then had to fund much of the service himself, accumulating over £10,000 ($13,600) in debt.

He recalls: “I went from £1,100 a month to nothing, living beyond my means every month because I always had a car to pay for and bill etc. with pay coming in to a house .”

But Peter, who now works as a project manager for the charity Cranstoun and was recently accepted into a postgraduate course in substance abuse at the University of Glasgow, says he is proud of what he has achieved.

He says: “It had to be done. Someone had to break up the constitutional wrangling over this.

“The mantra was ‘we can’t do this’ because of the Misuse of Drugs Act 1971. But since I proved there’s nothing illegal about it, the government Scottish has completely changed its tone.”

In 2020, Peter was charged under the Misuse of Drugs Act 1971 after police attended the drug van.

The charges were later dropped after his lawyer argued there was no public interest in prosecuting Peter as he tried to save lives.

Peter continues: “So yeah, I did something that changed the course of Scotland and got recognition for the value of harm reduction as a stand-alone treatment option.

“Our systems have been balanced toward abstinence and a drug-free utopia.”

He is now confident that Scotland will see its first fixed drug use site next year.

He says: “Glasgow will see a fixed site model this year. After the recent announcements… I just can’t see how it won’t progress.”