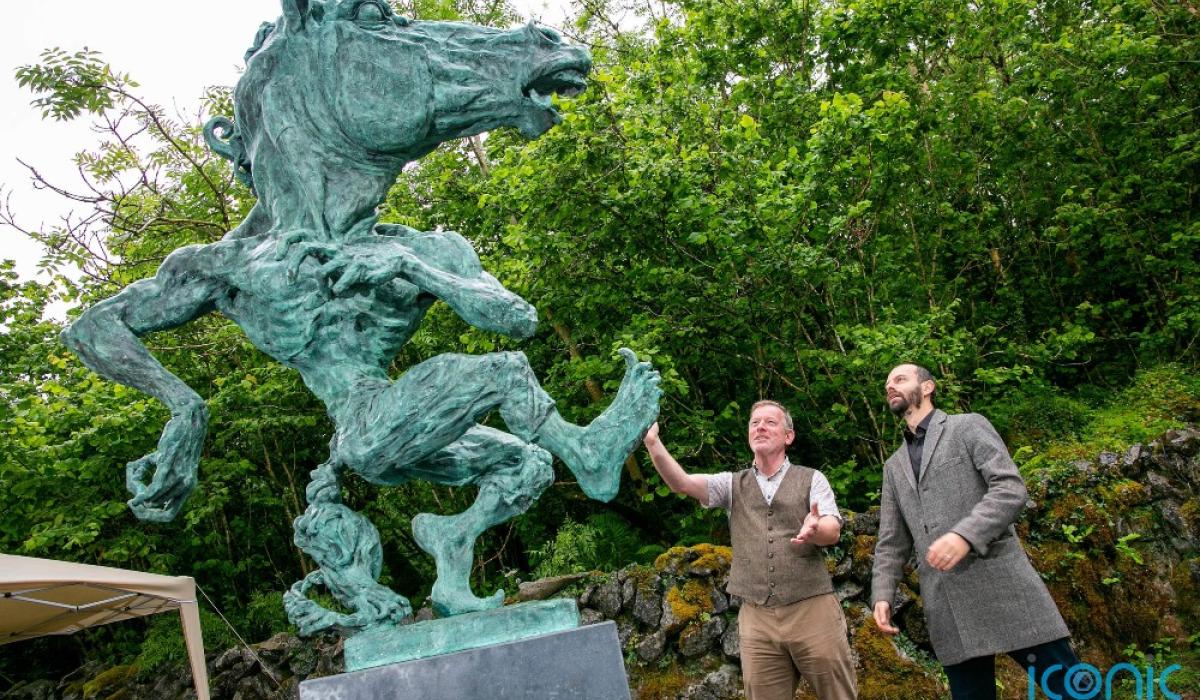 A ‘magnificent’ statue inspired by Irish folk figure An Puca and the region’s equine heritage has been unveiled in North Co Clare.

The Puca statue, which was commissioned by Clare County Council in 2021 and made by Kilkenny artist Aidan Harte, was originally due to be placed in Ennistymon, Co Clare.

But after some locals objected to a two-meter-tall bronze artwork because of its appearance after a priest denounced it during Sunday mass, the statue was unveiled in a new location.

The Michael Cusack Center is located in Carron, in an area historically named “Poll a Phuca” in Irish, which translates to “Lair of the Puca”.

This was chosen as the venue for the artwork following an expression of interest process held earlier this year and managed by Clare County Council.

Now located in the Thatched Cottage Exhibition Center near Burren National Park, the statue is expected to be a “significant attraction” for visitors, Clare County Council has said.

Chairman of the Michael Cusack Center Board of Trustees, Donal O hAinifein, said, “We are delighted to have been selected to host the Puca.

“We are thrilled to have Puca’s fantastic artwork coming home.

“The Michael Cusack Center is the most appropriate setting for this magnificent figure.”

Mr. O hainifein confirmed that there are advanced plans to develop an annual event celebrating the Puca.

“The annual Samhain/Puca Storytelling Festival on November 1 will celebrate the folklore around Puca with a program of events ranging from academic art to children’s art,” he said.

The inaugural event will be held later this year and will also coincide with the 175th anniversary of the birth of Michael Cusack in Carron, who is the founder of the GAA (the Gaelic Athletic Association).

Leonard Cleary, director of rural development for Clare County Council, described the Michael Cusack Center as “a suitable home for the Puca and will add value to both the facility and the community-run tourist attraction. “.

Statue creator Aidan Harte said: ‘I want to thank the people of Carron and the Burren for hosting this scallywag.

“I couldn’t choose a better backdrop.

“The Puca has come home.

“A wild place for a wild thing.”

Mr Harte described the Puca as one of the great characters of Irish folklore.

“Douglas Hyde, Ireland’s first president, described ‘a terrible steed’ carrying mortals to fairyland on his back,” he said.

“Surprise him in a good mood, Hyde said, and the Puca tells fortunes and grants wishes.

“People who have never heard these stories want to know if the Puca is good or bad. He is neither.

“A dark, cold place” – Michael Burry thinks the market has plenty of room to dip. But he finally sees value in these 4 actions