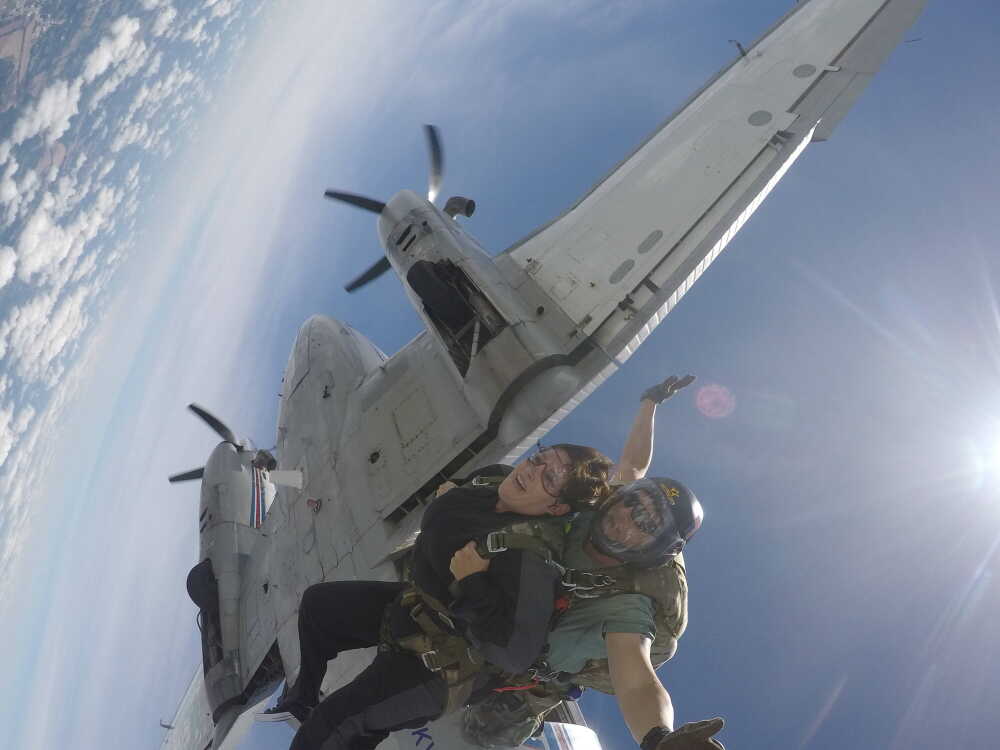 Misty DeJournett is pictured with her skydiving instructor during her first skydive.

“Whatever you do, when you get to the edge of the plane, don’t look down,” said skydiving instructor Alex Coker. As I walked towards the open door of the plane with this stranger strapped to my back, all I could see was blue skies and puffy clouds at eye level.

Don’t look down, sheesh, of course, that was literally the first thing I was going to do.

The air up there is cold, your ears are ringing, it gets a little hard to hear, as the plane climbs, your guts will shake, all of them, or at least mine.

I could feel my anxiety growing as if I had had six extra shots of espresso with my morning coffee.

You just have to let go, it’s up to you, the man in front, to take the step to the edge and dive from the plane and really it shouldn’t be any other way!

Free fall at 250 km/h stings your cheeks like a thousand little needles, you’re pretty sure you’ll have to unzip the suit you’re wearing and vomit in it, but this sight is pure terror, but absolute joy!

During this specific period of my life, I had just tragically and unexpectedly lost someone I loved. My heart was broken, and if I’m speaking honestly, my spirit was too for a while. I desperately needed to feel something other than the pain and sadness I had sunk into after my loss.

Whiskey and pizza had become temporary, but poor companions, so one day I decided it was time to try something different.

What was the craziest thing I could do, safely and immediately?

I called the closest place I could find that would throw me out of a plane. I had never had a bucket list before, but decided that was the first thing I checked off the list I hadn’t done yet.

Now, it has to be said, I’m not a fan of heights, so much so that I’m intimidated by the City Museum of St. Louis and its kid-friendly climbing attractions. So I did what any rational, size-afraid person would do, I ordered the video package with my dive. (See the video here)

I made my reservation for a jump in June and prepared for my fateful fall. A 14,500 foot freefall strapped to a stranger who would literally hold my life in his hands.

Alex Coker, skydiving instructor, sniper, police officer, and former US Marshal, among other titles, quickly became the coolest person I’ve ever seen, and more importantly, he brought us back to the ground safely without incident, which is more than I can say for my second skydiving experience.

A year later, almost to the day, I decided it was time to try again – I mean, it took almost that long for the adrenaline to wear off on the first jump. This time I let a friend take the responsibility of making the reservation so we ended up at a different skydiving location. I thought that was good, how different could it be, right?

I was strangely more nervous this time than I had been the first time, could I have come to my senses, maybe it was madness, maybe I was tempting fate ? I decided it would be wise to say a little prayer, it said something like this: “Dear lord, I don’t want to die, I still feel a little crazy so if you could just please see May I land softly or at least bounce back, Amen.

Moments later I felt the familiar sting of the wind on my face and the bugs in my teeth, skydiving instructor number two pulls the parachute, pulling us rapidly upwards, but this time it’s different, “Ugh Oh!” What, what was that, “Ugh oh” isn’t what you want to hear when you’re about 10,000 feet in the air.

“We’re going to have to get loose,” said the number two skydiving instructor, who wasn’t Alex Coker, I should add. Ok so now I’m pretty sure I’m going to die, what I thought, once was not enough!

A few seconds later we drop back to 157 mph but this time the ground appears much closer. He pulls the reserve parachute, we’re still falling relatively fast, but I’m pretty sure at this point we’d survive.

As we skidded across the landing field, I lifted my feet as previously instructed, we bounced a few times before coming to a complete stop. I had survived once more. The instructor added that he had only had to use the reserve twice in his 26 years of jumping. I’m lucky. Ok lord I hear you, thanks for letting me bounce back!

The landing may not have been smooth as I requested, but I bounced back. Maybe in life that’s all we can ask for, a reserve parachute and the ability to bounce back from a fall.

Misty DeJournett is a staff writer at the Daily American Republic. She can be contacted at [email protected]