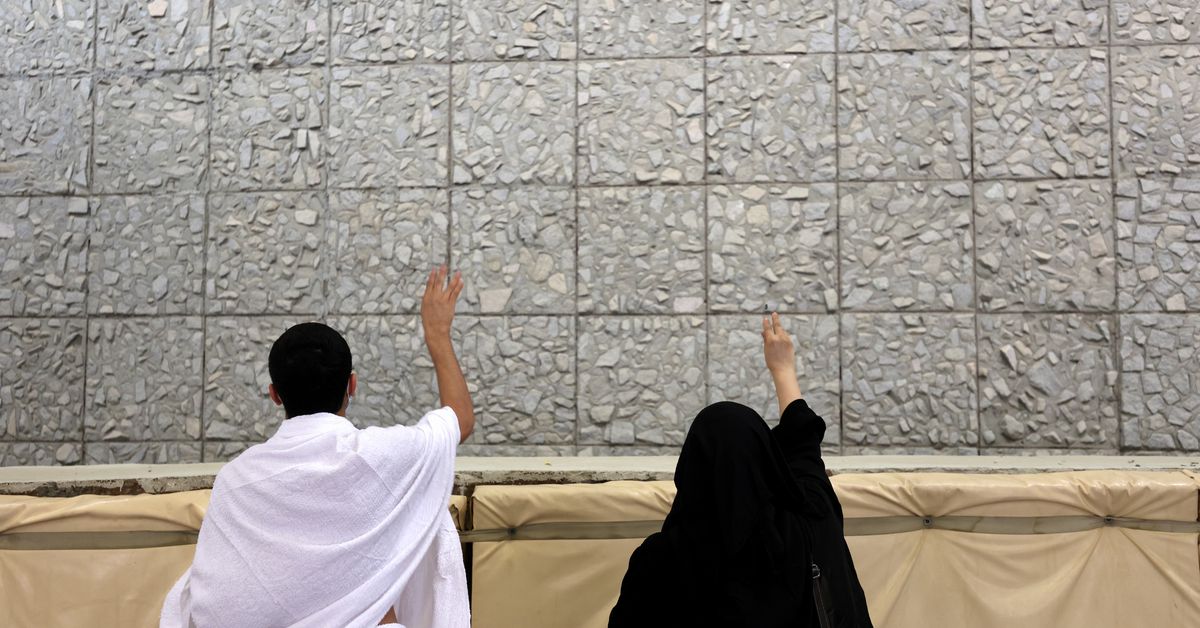 At only 33 years old, Daniel Calvert has already spent more than half of his life working in the kitchen.

At the age of 23, he was already cooking at the highest level – as Thomas Keller’s sous-chef at Per Se in New York – before moving to Hong Kong in 2016 to open the neo-bistro Belon for which he then got a Michelin. Star.

Settled in Tokyo last fall, Calvert is now preparing to launch a new restaurant infusing the elegance of French haute cuisine with an element he lacks in gastronomy today: a “sense of authentic comfort and warmth” .

Sezanne, which takes its name from a medieval city in the Champagne region of France, opens its doors on July 1. Located on the seventh floor of the Four Seasons Tokyo in the financial district of Marunouchi, the Japanese capital, the restaurant has been transformed after a major and costly renovation into a haven of clean lines and cool tones, with motifs inspired by Zen rockeries. .

Architect Andre Fu designed the interior of the restaurant, as well as the hotel’s casual eatery, Maison Marunouchi, which looks like a modern brasserie outfitted with shiny green platters, red cushion chairs, and a huge sculpture in rose quartz representing a teddy bear by the American artist Daniel Arsham. . 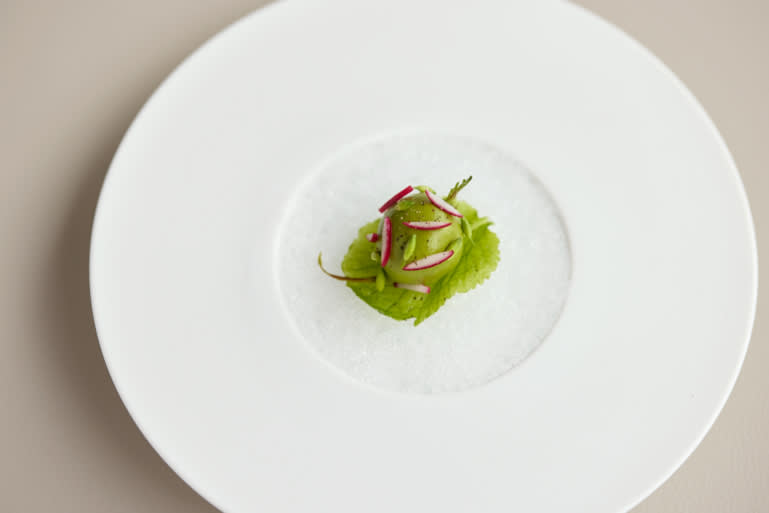 Above: “The food is presented as an event and we want to create a feeling of anticipation,” says Calvert, pictured here in the kitchen adjacent to Chef de Sezanne’s table. Bottom: Daniel Calvert’s version of butter radish, a radish and buttery snack typically found in French bistros and home dining tables. (Photos courtesy of Four Seasons Tokyo)

While Sezanne showcases all the luxury attributes you might expect to see at an upscale French establishment – Baccarat crystal, Lelièvre silk drapery, and pleasantly tactile Christofle plates – the atmosphere exudes easy friendliness, rather than formality. Italian-born butler Simone Macri, who has established a reputation for her refined but pleasant approach to hospitality in Jaan, Singapore, leads the service team. The hotel’s food and beverage manager, Stéphane Rabot, oversees it all, from Caprice, three Michelin stars, in Hong Kong.

“Technique is of course important, but customers keep coming back for an experience that feels like a heartwarming hug,” Calvert explains. “No one wants to feel like they’re on some sort of pilgrimage, which our industry has recently gotten carried away with.”

Calvert attributes his down-to-earth attitude in part to his modest upbringing in Surrey, an hour by train south of London.

Unlike many industry counterparts, he didn’t grow up learning to cook on his grandmother’s knees, but started cooking meals for his family to help his mother, who had two jobs in as a bank clerk. Quickly discovering that he had a talent for the trade, Calvert says that at the age of 13 he had already decided to become a chef.

“I loved having the chance to provide for people and make them happy with food,” Calvert says.

With no internet access at home, Calvert began using his weekends traveling to London to research the city’s most respected restaurants and learn what he could about food by analyzing their menus. Leaving school at the age of 16, and not yet mastering the basics of seasoning or knife-holding, Calvert knocked on the back door of longtime celebrity lair The Ivy where he was hired as a line cook. 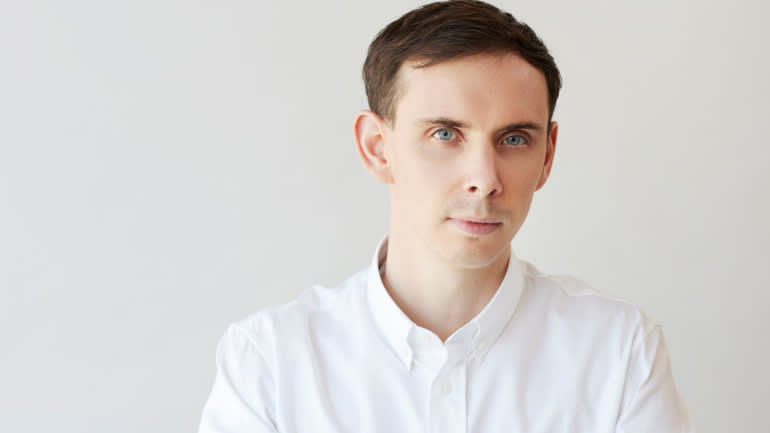 Above: Mastering the art of home cooking in his mother’s kitchen, Calvert made his professional debut at the age of 16 at London’s iconic celebrity hangout, The Ivy. Bottom: Precision is tempered by playfulness in dishes such as dashi avocado mousse topped with Petrossian caviar and topped with an ultra-thin disc of grated avocado. (Photos courtesy of Four Seasons Tokyo)

“The chef took his chance on me, and when that happens you feel so grateful,” recalls Calvert. “I’ve been lucky several times in my career, so I’ve always had a sense of responsibility to make sure those who helped me feel like they made the right decision. “

Now executive chef of the Four Seasons Tokyo in Marunouchi and responsible for the establishment’s upscale restaurant, Calvert wants to bring a new perspective to the city’s food scene.

Part of his plan is to “bridge the gap” between upscale and more casual dining through a series of collaborations with international chefs such as Danny Yip of Cantonese restaurant The Chairman, who tops the 50 list. best restaurants in Asia this year, and Matt Abergel. from Hong Kong Yardbird Yakitori Restaurant.

“Normally a place like the Four Seasons would only consider inviting chefs with two or three Michelin stars, but these restaurants do amazing food. Although we work in totally different styles, I think we can do something about it. interesting thing together, ”he says.

While the service will follow a tasting menu format, Calvert notes that the kitchen is already developing a repertoire of dishes to be served to returning guests.

“Food is presented as an event, and we want to create a feeling of anticipation,” Calvert explains. “When a restaurant serves the exact same menu – even in the same season – there is no excitement. You feel like another number.”

In preview a few weeks before the official launch of Sezanne, the meal opens with the Calvert version of radish butter, a snack of radishes and butter that is usually found in French bistros and on dining tables at the House. The humble root vegetable is dipped in a buttery jade green coating sprinkled with patches of red radish skin, making it look like a tiny Faberge egg. 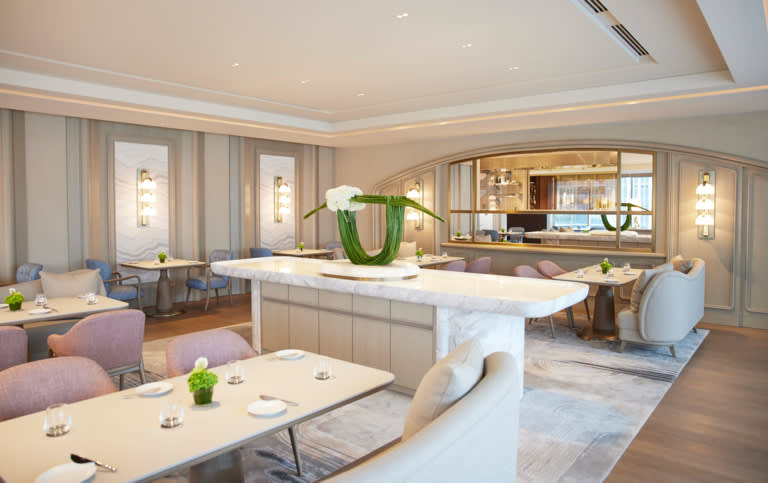 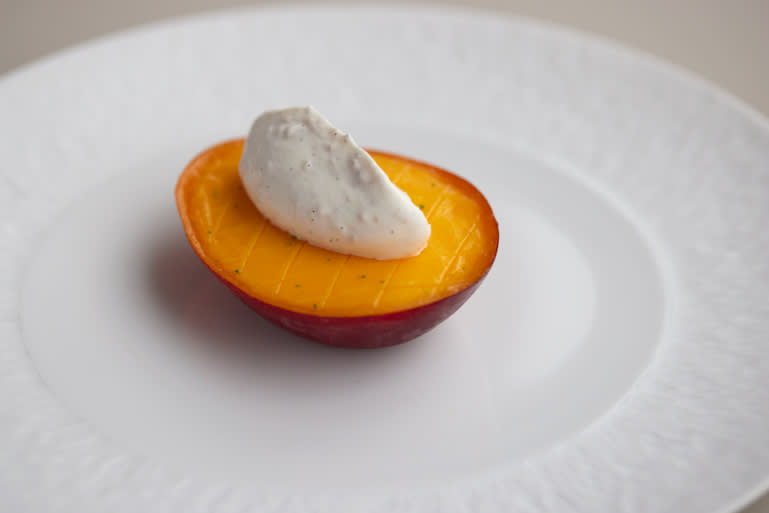 Above: Sezanne showcases all the luxury attributes you might expect to see in an upscale French establishment – Baccarat crystal, Lelièvre silk drapery, and pleasantly tactile Christofle plates. Below: the Miyazaki mango, topped with Chantilly cream, which conceals a delicious secret. (Photos courtesy of Four Seasons Tokyo)

Precision is tempered by playfulness in dishes such as dashi avocado mousse topped with Petrossian caviar and topped with an ultra-thin disc of grated avocado. The foie gras terrine is adorned with a border of apricot and Sauterne jelly, dazzled by a subtle sprinkling of silver leaf. The center of the terrine contains a surprise: a circle of candied pigeon with a taste almost of Chinese sausage.

Whole Hokkaido chicken poached in yellow wine and stuffed with chanterelles evokes memories of drunken chicken from Shanghai – a nod to Calvert’s tenure in Hong Kong. For dessert, a slice of Miyazaki mango, topped with Chantilly cream, which conceals a delicious secret. The last bites – perfect bites of chocolate ganache brownies – are reminiscent of the comfort food he craved in New York City.

Originally scheduled for June 1, the opening of Sezanne was delayed due to an extension of the COVID state of emergency in Tokyo forcing restaurants to limit opening hours and alcohol service. While some restrictions will likely remain until July, Calvert is eager to move forward.

“I’m just ready for people to come and then come back so I can welcome them home,” he says.