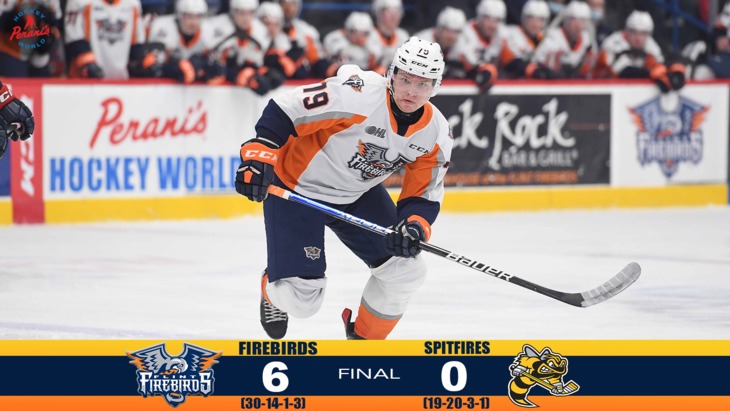 Sarnia, Ont. – The Firebirds continued their scorching game, beating the Sting in Sarnia by a final score of 6-0, backed by Luke Cavallin. Fullback Dmitry Kuzmin (Winnipeg Jets) scored his seventh and eighth goals of the season and teammate Tyler Deline scored his fifth and finished with two points (1 G, 1 A). Brennan Othmann (New York Rangers) picked up her 100th OHL point with two assists on the night. Forwards Riley Piercey (22) and Zacharie Giroux (12) also lit the lamp for the visitors and each added an assist for two points on tilt. Between the posts, Luke Cavallin recorded his 24th victory, stopping the 34 shots faced. Benjamin Gaudreau (San Jose Sharks) got the start in net again for his Sting and finished with 17 saves on 21 shots before being relieved by Anson Thornton (Arizona Coyotes), who repelled 12 of 14.

The first 14 minutes of the game went scoreless, although Flint had the best opportunity to score during that time. With Sarnia on the first power play of the game, a high bouncing puck made its way from a plank battle in the neutral zone to a breaking Brennan Othmann in his offensive zone. He fired an uncontested shot, but Gaudreau blocked it aside and play continued. With nearly five minutes remaining in the first period, a few players got stuck in a scrum in the Sarnia area. Tag Bertuzzi picked up a loose puck in the neutral zone and threw a backhand pass to Tyler Deline. It was the defenders who led the way, as Deline carried the left side and hit Dmitry Kuzmin in stride on the right side. Kuzmin lifted the puck shortside for his seventh of the season and sixth in his last nine games, recorded at 2:55.

Kuzmin’s goal was the only scorer of the first period, despite Sarnia taking the lead on shots 13-9 and faceoffs 13-11. The Firebirds killed their only penalty and played without a power play for the first 20 minutes.

After the first half of the middle frame went scoreless, the Birds scored three straight games to lead a four-goal lead into the second intermission. First, Flint found himself on the power play 5-on-3 for over a minute. It took just 24 seconds with the two-man advantage before Othmann got his side ready and started the game with a pass from the right point to Gavin Hayes below the right circle. Hayes wasted no time feeding Riley Piercey into the high slot which buried his 22nd of the season at 10:18. During the four-on-four game moments later, Ethan Hay won an offensive faceoff against Zack Terry. Terry sent the cross pass to Tyler Deline from the right side of the zone, and Deline’s hitter hit the string at 11:56 to give the Birds a 3-0 lead. Finally, while shorthanded, Keppen carried left wing with a defender in tow. He slipped the puck past the back guard to Zacharie Giroux who skated to the right. Giroux slapped the bouncing puck on Gaudreau’s left pad for his 12th of the campaign with three seconds left in the second period.

Shots in the second period were even 12 on each side. The Bees beat the Birds 16-10. Flint went 1 for 2 with the man advantage and held Sarnia scoreless with three man opportunities.

Anson Thorton started the third goal for Sarnia. Riley Piercey threw a close-range shot at him just past the midpoint of the frame, which Thornton shoved aside. Kuzmin was there for the rebound and hit hard with his second attempt to bury the loose puck behind the Sarnia goaltender with the teams evenly matched. Finally, with just under four minutes to go and Flint on another power play, Sahil Panwar earned a faceoff in the offensive zone against Zacharie Giroux. Giroux sent the puck down the left wing half-boards toward Panwar on the other side of the slot for a back one-timer that was his 13th of the season, recorded at 16:14.

The last shots on goal were even 35 per side. Sarnia beat Flint 41-34 in the 60 minutes. The Firebirds finished two for five on the power play while keeping the Sting scoreless with six chances.

Next step : The Firebirds return to the friendly confines of the Dort Financial Center for a pair of exciting home games this weekend, starting Saturday night when they host the Sting to complete the three-game series. Saturday’s tilt is themed around Flint Generals Night, sponsored by Lewis Tree Service. The Firebirds will wear special throwback uniforms in honor of the former team calling Dort Financial Center (then Perani Arena and Event Center & IMA). There will be a post-game jersey auction to follow the conclusion of the game by Tim Narhi Auctioneer & Associates, LLC. Additionally, several Flint Generals alumni will be on hand for a pre-game meet and greet in the lobby. All tickets for Flint Generals Night can be purchased at ETIX HERE or at the Dort Financial Center box office.

Sunday, February 27 will be Family Fun Day when the Firebirds host the Erie Otters. Additionally, this is our “Talk Today” game sponsored by Genesee Health Systems and there will be tables set up around the lobby by local agencies raising awareness of mental health and the services offered. Additionally, make-up artists and ball flyers will be available in the lobby during the match. All adult tickets purchased are eligible for up to TWO FREE child tickets. All Family ‘FUN’day tickets can be purchased at ETIX HERE or at the Dort Financial Center box office.

Dengue Fever: I cannot close my eyes to what is happening in the city, says Delhi HC | Delhi News