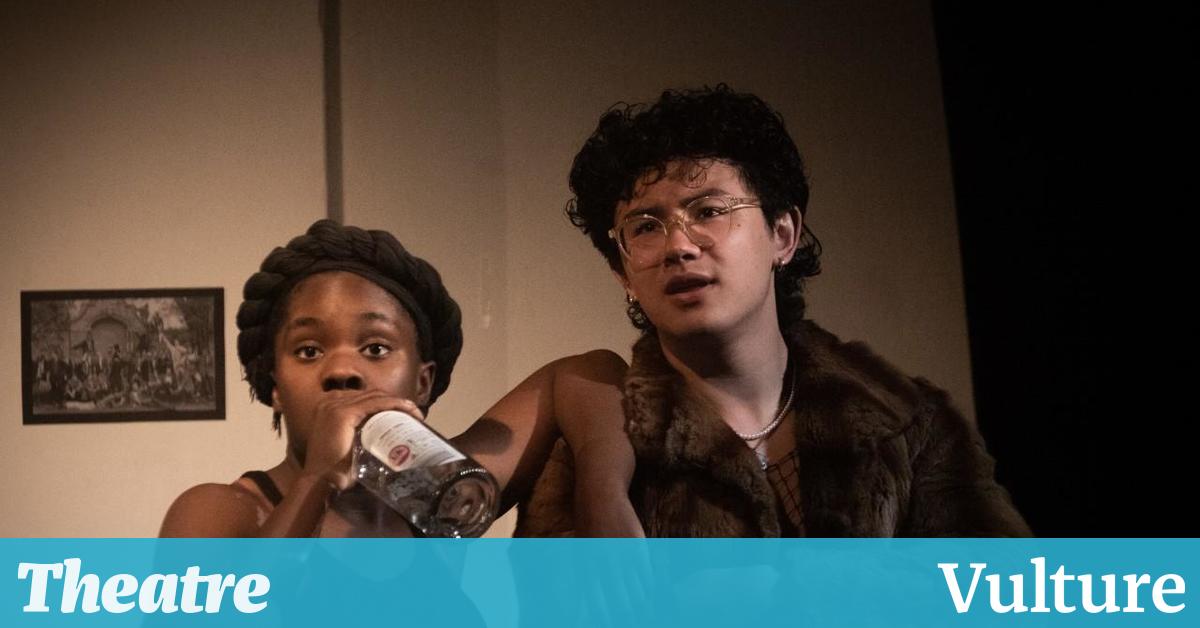 With Bronagh Leneghan and Karisma Drage taking you on an evening that is quite out of this world, heaven truly is A place on Earth. Inspired by the experience of writer Ethan MacDonald working in a bar near Charing Cross, A place on earth traces the course of a night out with four queer friends, and playwright Ethan MacDonald promises you all the stops – from the meadows, to the queue outside the club, the actual clubbing, the smoke breaks and even the (very wood) the next morning. While sporting the familiar bow of a night out, this piece nonetheless manages to impress with its ability to infuse a deeper appreciation for the bonds of friendship, young love, and queer culture amid the highs and lows. of the evening.

Ethan MacDonald’s brilliant writing laid the groundwork for this absolutely cracking piece. Every quip, line, and jibe between characters was written with precision and eloquence that knocks the nail on the head. One of my favorite gems of the night includes, “This place is amazing. Maybe I should go aw****r too / I think you meant banker darling / of course”. But beyond these moments of laughter, the script also interweaves moments of tenderness, such as when Tina (Joy Adeogun) confesses her feelings to Molly (Louella Lucas) with concern and vulnerability. The ingenuity of the script was taken to greater heights by the incredible cast on stage.

The chemistry between the actors was impeccable, where the actors’ ability to lean on each other allowed the audience to be drawn directly into the narrative. Each bringing something to the table, they managed to create the four horsemen of a chaotic evening. Molly (Louella Lucas) as the mother hen watching over everyone, Tina (Joy Adeogun) as a more laid-back friend, Tom (Xander Pang) recently had a broken heart and is looking to vent, and Harry ( Liam Macmillan), slightly nervous but eager to try everything. The performance of “cool mom” Gen (Alix Addinall) also brought hearty laughs from the audience. Endearing and increasingly talkative about wine, Alix has effectively created an adorable character that any child would be rightly embarrassed about.

I particularly enjoyed Harry’s performance – with this awkward inefficiency in the face of his crush, Tom makes him a relatable character. Even the set (Tess Bottomley and Lily Kemp) was a tour de force in their own right – from National Rail’s announcer impressions (“Next station, Paddington”) to the deluge of absolute characters you meet on Grindr; their ability to switch between role demands was the icing on the cake.

Although there were times when the dialogue seemed to drag on a bit too long, the directors managed to always bring it back and move the piece forward. The dynamism of the piece was injected by the energetic physical performances of Liam Macmillan, who always managed to break up these brief moments of monotony. I must admit that I initially had qualms about how Bronagh and Karisma would bring the club atmosphere to the stage, but I’m happy to report that my fears were largely unfounded. Huge props to the entire production team; the combination of dim lighting, club bangers and efficient use of props made for a compelling recreation of the club at the heart of the Corpus game room. Overall I would say A place on earth quite a successful evening!

We are therefore almost entirely dependent on advertising for funding and expect to have a few difficult months and years ahead.

Despite this situation, we will look for inventive ways to seek to serve our readership with digital content and of course also in print!

Therefore, we ask our readers, if they wish, to donate from as little as £1, to help cover our running costs. Thank you very much, we hope you can help us!