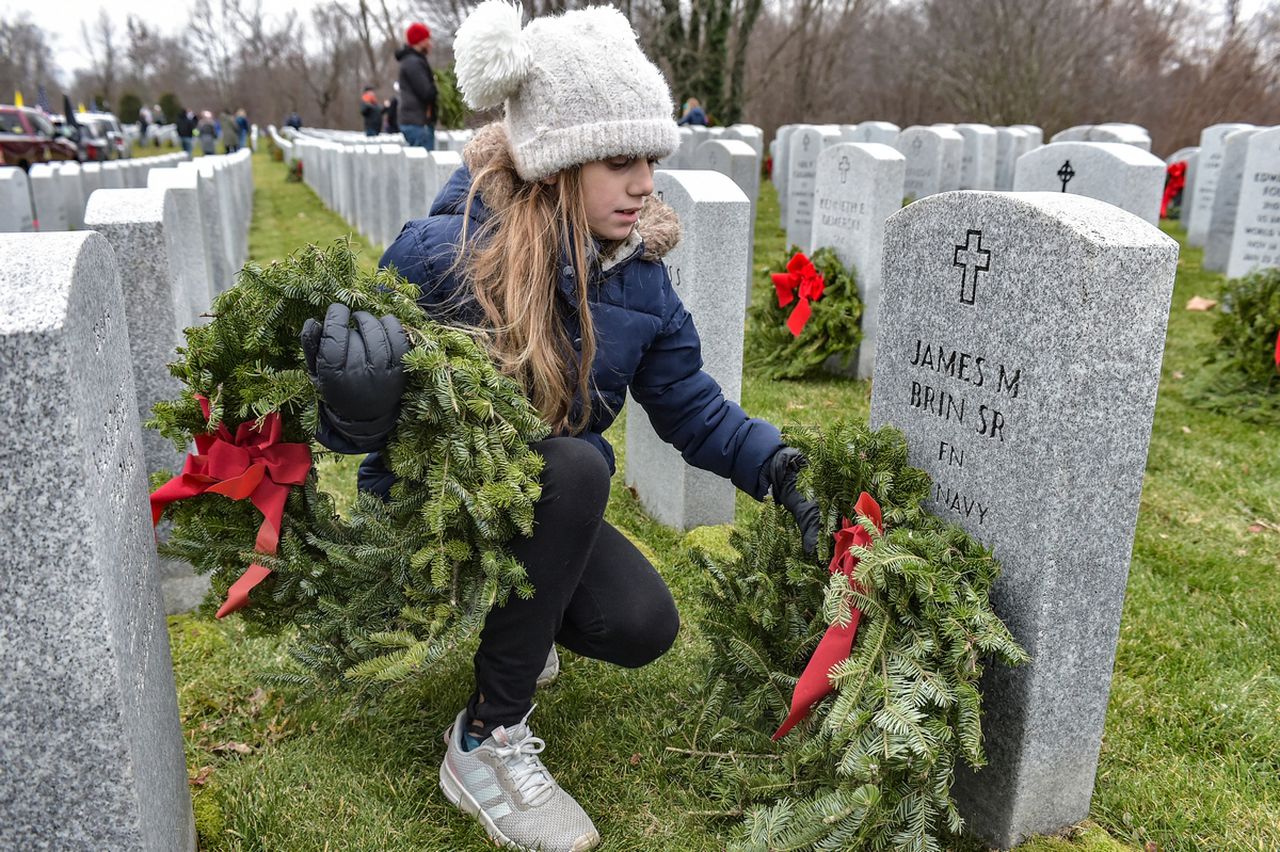 AGAWAM – One man came to lay a wreath at the grave of his brother who died from exposure to Agent Orange decades after serving in the Vietnam War, another wanted to remember his brother, another elder Navy fighter, and a couple drove over an hour to honor people they didn’t know.

A frenzied fundraising effort culminated Saturday with nearly 1,000 people gathering at the Massachusetts Veterans Memorial Cemetery near Main Street to lay wreaths on approximately 8,500 graves of men and women who have served their country .

“It means everything to me. I value the veteran more than my life because they gave me freedom and I honor him more than anything, ”said Edward Boutin, of Springfield, who volunteered to serve in the US Navy for the Vietnam War and remained in the military for 20 years.

As he wanted to honor all veterans, Boutin said he appreciated the chance to lay a wreath on the gravestone shared by his brother Normand Boutin, a Navy veteran, and his sister-in-law Joyce Boutin, both died about three years ago.

National wreaths across America began in 1992 with the goal of honoring veterans by placing wreaths on their graves one day per year – which fell on December 18 of that year. The Friends of the Massachusetts Veterans Memorial Cemetery at Agawam joined the effort a decade ago with a section of the cemetery and enlarged so that the appropriate 8,500 graves have been decorated each year for the past five years. years.

But this year it hardly happened. Donations were down, possibly due to the COVID-19 pandemic, and just days before the national deadline, Paul Barabani, chairman of the group of friends, realized he had sponsorships for a just under half of the graves.

A call in the media has changed so quickly. Some sponsored one, others sponsored five, companies sponsored 100 or 150, and Eversource took the effort far beyond the goal with a donation of 1,500 crowns, said Gina Willette, local coordinator since the start of the program.

Each sponsorship is meaningful and Willette said she appreciated that some did not have the money to donate but came out on Saturday morning to help place wreaths on the graves.

Barabani agreed. He wished to thank Six Flags New England who provided parking for the many volunteers and the King Gray bus lines who transported these people from the lots to the cemetery. He thanked Agawam officials and the police who helped coordinate the event and the Hampden County Sheriff’s Department who provided additional staff for traffic control and other things.

“Their mission is to take care of our veterans,” Barabani said of Eversource.

It was not just the local residents who attended. Cheryl Lussier Poppe, State Director of Veterans Services, drove two hours for the event.

“It’s heartwarming to see so many people wanting to come out and honor their veterans,” Poppe said.

State Senator John Velis, D-Westfield, a major in the U.S. Army Reserves, said he attends every year and is delighted to see so many children help place wreaths with their families and at the same time learning about the sacrifices members of the military have made for their country.

“I come every year. It is an honor and a privilege to have this cemetery in Agawam, ”said Mayor William Sapelli.

He added that he appreciates the number of city residents who have joined Friends to support veterans and their families and help with wreaths.

While some could walk to the cemetery, Nicole and Stephen Robert, who work for the Department of Veterans Affairs, drive over an hour each year from Putnam, Connecticut, to help Willette.

They placed wreaths in 60-degree weather, pouring rain, and snowstorm, so Saturday’s overcast skies and threatening rain didn’t bother them at all.

Before the volunteers deployed, Richard Bastien, the director of Massachusetts Veterans’ Memorials, gave some simple instructions. He instructed volunteers to place wreaths neat and clean, especially in inclement weather, and advised them to avoid graves marked with emblems signifying that the veteran was of Jewish or Islamic faith and would not have celebrated Christmas.

Charlie Thomas, of Ludlow, who served in the United States Army in 1968 and 1969, laid wreaths at the graves of his mother Margaret and father Charles, who was a WWII veteran, and his brother Phil Thomas, who served in Vietnam.

His brother, who died in 2006, was exposed to Agent Orange while serving in Vietnam, which resulted in his death from lung cancer years later.

“It just means the world to me,” he said. “You look around at all these people who aren’t even veterans here. “

Hundreds of volunteers lay wreaths on the graves of fallen soldiers