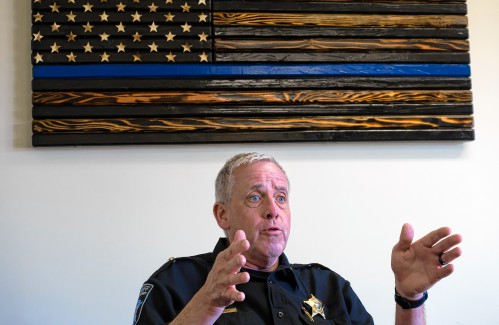 After implementing most of the recommendations of a 2020 state commission for law enforcement reforms, the Concord Police Department and Merrimack County Sheriff’s Office are still working on accreditation national and obtaining body cameras for their departments.

In 2020, Governor Chris Sununu convened the Commission on Law Enforcement Accountability, Community, and Transparency, known as LEACT, in response to the murder of George Floyd in Minneapolis. The commission’s recommendations ranged from increasing training requirements to emphasizing community policing.

Sununu announced earlier this month that the New Hampshire State Police has equipped all of its 260 patrol cruisers with front and rear cameras. All but one of the state police troops had been trained and equipped with body-worn cameras, and the remaining field troop will be trained this month, according to Amber Lagace, state police public information officer. ‘State.

Neither the Concord Police Department nor the Merrimack County Sheriff are among those grant recipients.

Chief Brad Osgood said Concord did not apply because the state matching grant is capped at $50,000. Osgood said getting body and dash cams would likely require hiring someone to run the video program. Typically, sellers of body-worn cameras require five-year contracts, he said.

Concord’s capital improvement program provides $470,000 for the purchase of body-worn and car video cameras in fiscal year 2024, with $80,000 each of the next four years.

“I wouldn’t apply for a grant when I know I’ll only get a maximum of $50,000 unless I have the green light to go into this program,” Osgood said.

City council approval is required before the department can apply for grants, and Osgood said if council approves that funding, the prosecutor’s office would likely need an additional attorney to review the video footage. The department tested a body camera product in 2020 and may test other camera vendors this fall.

Merrimack County Sheriff David Croft also said a one-time payment of $50,000 from the state would be insufficient to fund a camera program, which would require ongoing data storage and staff to go through footage. video.

He cited cost as the main barrier to adding body cameras, but also said some of the legal requirements and processes were still unclear, including how long departments would need to maintain video under the New Hampshire Right to Know Act.

“Kind of like when they come out with a new car, I want them to fix the bugs before they jump in. I foresee that happening in the future here, but it won’t be this year,” Croft said.

The issues of cost, legal requirements, related policies and data storage were resolved by other New Hampshire police departments years ago, including in nearby Weare, which began to using body work cameras in 2014.

Another LEACT recommendation called on law enforcement to collect demographic data for arrests as well as citations and arraignments. Last year, a section of a bill that would have included race on New Hampshire driver’s licenses was deleted in the state Senate.

Osgood said the Concord Police Department does not routinely collect racial demographic data and is looking to the state to make that information more uniform.

“The only way around it is to guess or ask,” Osgood said. “We haven’t explored that opportunity or that avenue yet. It’s easier if it’s built into the license.

Merrimack County Sheriff David Croft said his office collects this type of data when deputies write tickets, but does not break down stops by race.

“It’s definitely in our computer system – it’s there,” Croft said. “We have always collected it. It’s available, but I’m not breaking it down.

Another recommendation from LEACT suggests that local departments apply for national accreditation with the Commission on Accreditation of Law Enforcement Agencies, known as CALEA. The New Hampshire Police Training and Standards Board is also in the process of developing state-level accreditation, which New Hampshire has had in the past.

“Accreditation is such a big piece of the law enforcement pie because it puts everyone in a more professional position,” Croft said. “But it also puts everyone on the same page, and we do the same. So if we leave Boscawen and go to Concord, everything is the same.

Croft said state accreditation would be more accessible for his department and many others than CALEA. “Once it’s up and running, and all the t’s are crossed and the i’s are dotted, my office will definitely jump on board and start this process,” Croft said. He said receiving and maintaining CALEA would require significant expense and the hiring of at least two additional staff in his office, which currently employs around 70 civilian workers and sworn officers.

Osgood said he believed Concord would be well established to receive this state accreditation and that he would still want the department to work toward CALEA, which he called “the gold standard of accreditation.”

“Nationally accredited police departments do much better in civil litigation,” Osgood said during a May 2 city council meeting. “I think the capital, we should be able to achieve that.”

Concord’s main obstacle to national accreditation is the department’s police station, which would not meet CALEA requirements as they exist today.

A space analysis by HL Turner Group presented to Concord City Council in May found that the Concord Police Station, built in 1975, lacks space for the department’s current functions and potential future growth. The women’s locker room, computer crime office and public lobby are all too small, according to the study.

One of the aspects of police headquarters that the Turner group described as creating a ‘dangerous situation’ was the long route through the station that inmates have to take from the sallyport to the mechanic’s workspace , an interrogation room on the first floor and the records office to a reservation cell in the basement of the building.

“It’s quite a trip, and a lot can happen from the car to the booking hall,” Osgood said in an interview.

Concord’s capital improvement program includes future funding to renovate the existing police headquarters or build a new one, with $2.5 million in general fund bonds set aside for the design over the course of the year. fiscal year 2026 and $25 million for construction in 2027.